Easy to Use
Underground Stemliner is a blast hole liner designed specifically for underground operations. Made from a blend of strong plastics infused with anti-static additives that greatly reduce static build-up generated in the liner, Stemliners are designed to withstand the harsh conditions of underground site installation.

Underground Stemliners make wet holes dry and enable miners to use ANFO (ammonium nitrate-fuel oil) rather than blasting with stick powder. Mines can see savings in the cost of explosives and improved fragmentation because of a better coupled explosive load in the hole. Many companies have saved from $3.00 to $6.00 per wet hole using Stemliners.

Underground Stemliners are made to be miner-friendly and easy to use. Position the Underground Stemliner at the hole opening; push the anti-static ANFO hose along with detonator and a primer through the Stemliner packaging and into the hole. When the hose reaches the toe of the hole, the liner is in place. Simply turn on the air and blow the liner full of ANFO.

All explosives can produce noxious fumes when detonated and the use of liners may increase the production of these fumes. The users of Stemliners should realize that the post blast fumes may be harmful and precautions such as adequate ventilation and other Mine Safety and Health Administration regulations are absolutely necessary to prevent potential harm.

Plastic liners such as Stemliners can act as capacitors or holders of static electricity. For this reason Stemliners should never be used with electric caps or any initiation system that may be sensitive to static discharges. Please contact the manufacturer of your initiation system to make sure it is compatible with liners. In addition make sure you are in compliance with all blasting regulations; Federal, State and local.

Please use Stemliners correctly, follow regulations and enjoy the cost savings they offer. 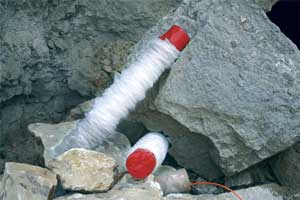